← more from
Légère Recordings
Get fresh music recommendations delivered to your inbox every Friday.

Year Of The Funky 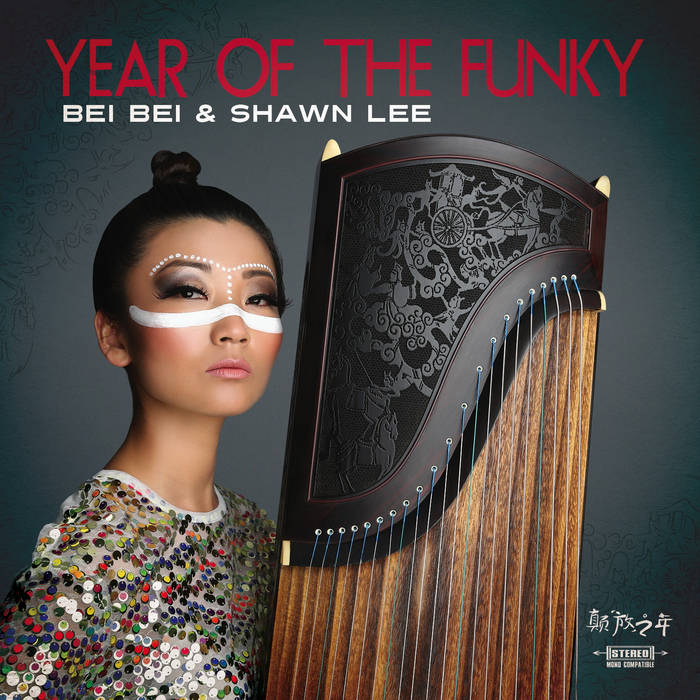 Zodiac-Attack Very funky, an extremely amazing blend of sounds and feelings. Probably one of my favorite albums ever. Favorite track: Danxia Disco.

Hal I'm a sucker for fusions of sounds and styles. The traditional and the modern meld beautifully in this work. The cover of "See You Again" is a personal favourite of mine here. Well done Bei Bei and Shawn! Hope for more in the future as well Favorite track: See You Again.

Mateo Jennings Wish 2020 was the year of the good funky but outstanding collaborations like this make things a little more bright. Meditative and melodic all the way thru.

Paco Lives up to its promise--both funky and original. A rare accomplishment in this kind of music. Favorite track: Year Of The Funky.

„Year Of The Funky“ is the second album from Bei Bei (荷蓓蓓) & Shawn Lee. After their debut collaborative album "Into The Wind" (Ubiquity Records, 2010), the Chinese guzheng virtuoso / composer and the prolific multi-instrumentalist / producer join forces again on 12 new tracks. „Year Of The Funky” marries a unique blend of ancient tradition with studio trickery. Eschewing all notions of superficial "Asian/Fusion", this uplifting, genre-bending, and sophisticated sound brings together both East & West with musical aplomb. The new album continues as a logical progression from "Into The Wind". It ventures into both new tempos & moods while deftly connecting the past, the future and what lies beyond.

About Bei Bei
The Guzheng is over 2000 years old and belongs to the Asian long zither family. It was used in both folk and court music in the ancient China. Falling in love with the 5 foot tall x 1 foot wide 21-stringed Chinese instrument at first sight, Bei Bei began playing at the age of seven and received her professional musical training at the Central University of Nationalities in Beijing, China and the Hong Kong Academy for Performing Arts in Hong Kong. She also studied Jazz music and improvisation at Fullerton College in California. Bei Bei roots her art in classical music and expands into other styles, combining new with old into creative new expressions, especially in her collaborations with musicians from different genres such as funk, jazz, alternative, electronica, hip-hop, and dance. She is a multi-award winner of many national and international awards. In 2011, she and her music were included in the American college textbook "World Music" by Michael Bakan. In 2015, she was featured as one of The Most Fascinating People of Los Angeles by LA Weekly Magazine. As a studio musician, she recorded for Sci-fi Channel’s “Battlestar Galactica” and award-winning video game original score “Revelation” (天谕). As a composer, she composed music and performed for the China Central TV documentary series “Dun Huang”, Chinese movie “Copycat”, and for Canon web promo video “Tiger’s Heart” . She released her debut album "Quiet Your Mind And Listen" in 2006 and her collaborative album "Heart of China" (Universal Music), with Richard Horowtiz, in 2008. Her last collaborative album "Into The Wind" with Shawn Lee was released through Ubiquity Records in 2010. As an educator and author, she has published two books "Gu Zheng Sessions Vol.1" and "Bei Bei’s Easiest Guzheng Course Book 1" with accompaniment CD and videos. She is the director of Lotus Bud Guzheng Academy in Orange County California and business owner of The Guzheng Shop.

About Shawn Lee
Shawn Lee is one of the most prolific musicians of his generation. A multi-instrumentalist, producer, singer songwriter, composer and Radio DJ who has released 35 albums as an artist to date. He has played, produced and written on hundreds of records. He has worked with a diverse range of artists including Jeff Buckley, Kelis, Saint Etienne, Money Mark, Amy Winehouse, Jonathan Jeremiah, Darondo, Adrian Younge, Tony Joe White, Robbie Williams, Incognito and Princess Superstar to name just a few. Lee's music has been used extensively in both film & TV - "Monuments Men", "20 feet from stardom", "House of cards", "Orange is the new black", "Blacklist", "Vice Principals", "Oceans 13", "Eastbound & Down", "Ugly Betty", "Nip Tuck", "CSI," "Confessions of a shopaholic", Cinemaxx, Jaguar, BMW, Barclays, Clarks shoes, Head & shoulders and many many more. He has also created bespoke music for Hermann Miller, Ace Hotels and Wallpaper magazine. As a composer, he has scored two documentary films "Elevate" and "Under the sun". Lee also created the original soundtrack for the feature films "Save Angel Hope", "Live Evil," "12 Dare's" and composed the original scores for video games "Zombie Playground" and "Rockstar's Bully" which was nominated for best score twice - winning once. Shawn Lee is an American and has lived in London England for over 20 years with his wife and his two daughters.

Bandcamp Daily  your guide to the world of Bandcamp

Kari Faux drops off her deluxe album 'Lowkey Superstar' plus tunes by Shunaji and Samplelov.